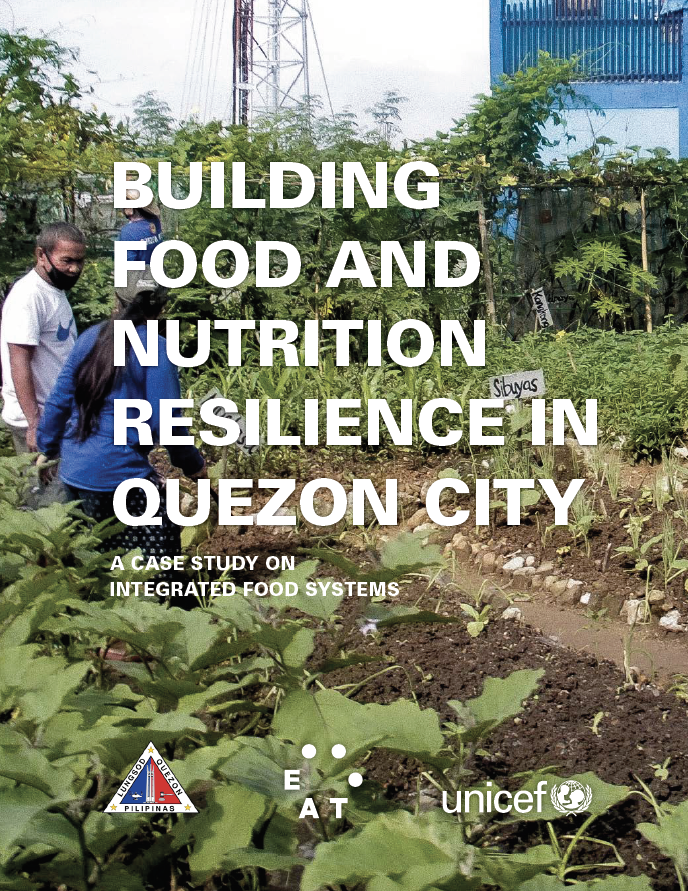 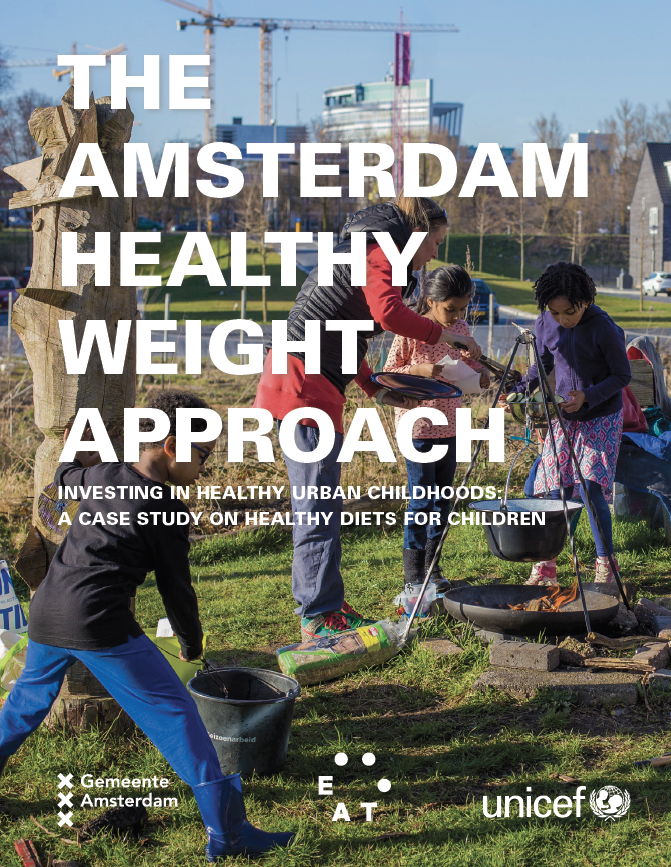 EAT and UNICEF are releasing two case studies that showcase how cities are working to improve food security, nutrition, and resilience through an integrated food systems approach. The analyses, featuring the stories of Amsterdam and Quezon City, have been developed to provide guidance and inspire further action for enhancing sustainable food and nutrition systems around the world.

The ways in which children and their families buy, cook, and eat their food are affected by the quality and influences of the physical, social, and economic conditions around them. Cities house the majority of the world’s population and are growing exponentially, particularly in low- and middle-income countries. And while cities are full of opportunities, they are often places where nature, public space, and adequate access to health, protection, food, and nutrition are not guaranteed.

“Urbanization is changing the face of malnutrition,” says Victor Aguayo, Global Chief of Nutrition at UNICEF. “As millions of families leave the countryside for cities, they change the way they feed their children.”

As fast food and packaged snacks become readily available and with few outdoor spaces to gather and play, the way children eat and move in cities is shifting.

As fast food and packaged snacks become readily available and with few outdoor spaces to gather and play, the way children eat and move in cities is shifting. For the urban poor, eating well proves even more difficult as socio-economic inequalities further limit access to nutritious foods and basic services.

In addition, research by the EAT-Lancet Commission has revealed how unsustainable diets are putting the planet’s health at risk—casting a spotlight on the urgent need to transform urban food environments to make healthy and sustainable food the default. While every city is unique, all cities should be supported in making the necessary changes for healthy and sustainable eating to become a reality for all children.

“Cities can decide to drive the great food transformation,” says Olav Kjørven, Chief Strategy Officer at EAT, “starting with changes to public food procurement, introducing marketing restrictions for unhealthy food and beverages, and taking concrete steps to improve urban food environments, not least in and around schools. But there is no reason to stop there. Cities can reach out to neighboring rural districts to develop joint plans that allow both urban consumers and rural producers to benefit.”

Cities and local governments can play a significant role as policymakers, implementers, and representatives of a variety of communities.

Progress is underway in many municipalities, experiences which will be important to share and learn from in order to support an increase in access to nutritious food and healthy environments.

Progress is underway in many municipalities, experiences which will be important to share and learn from in order to support an increase in access to nutritious food and healthy environments where children can live, learn, eat, play, and meet.

As part of an emerging collection of best practices, EAT and UNICEF have taken an in-depth look into two promising stories of leading cities supporting urban food security, resilience, and healthy diets. The case studies explain the unique characteristics of each city’s approach, activities and strategies being developed, as well as lessons learned for other city leaders to take on.

“A majority of children live in cities nowadays, including in low- and middle-income countries where the footprint of UNICEF programs is the largest,” says Aguayo. “Our work on children’s nutrition needs to consider this transition, especially in our efforts to create healthy food environments fit for every child.”

The first case study describes the Amsterdam Healthy Weight Approach (AHWA), a unique city-wide, local government-led initiative aimed at achieving a healthy weight for children through a healthy environment. Launched in 2012, the AHWA was designed to address the complex problem of childhood overweight and obesity, much more prevalent at the time amongst children living in the city of Amsterdam than the national average.

Amsterdam’s approach demonstrates the capacity of—and the need for—local authorities to take initiative in tackling “wicked” problems such as childhood overweight and obesity.

Amsterdam’s approach demonstrates the capacity of—and the need for—local authorities to take initiative in tackling “wicked” problems such as childhood overweight and obesity.

The AHWA was initiated by the local government authorities of the city of Amsterdam, prompted by data showing a higher rate of overweight and obesity among children under 19 living in the city. In Amsterdam, the prevalence of overweight and obesity among children aged 10 years was 21 percent compared to the national average of 13 percent. While overweight is often seen as a problem among wealthy societies, it is striking how much it now also affects low- and middle-income communities and how rapidly the problem is increasing. Therefore, the Amsterdam case study defines key success elements that might make the AHWA, or parts of it, transferable to other cities and contexts, particularly those in low- and middle-income countries:

The second case study looks at actions taken by Quezon City in the Philippines, a recent signatory of the Good Food Cities Declaration.

Quezon City is at a paradox where some communities suffer from hunger while others are eating too much of the wrong foods. Rising overweight, obesity, and hidden hunger—particularly among school-age children and adolescents—has become a top nutrition concern for local authorities and households. As in many other cities around the world, this phenomenon may be attributed to the shift towards unhealthy food and built environments, a lack of affordability for nutritious foods, fast-paced urban lifestyles, and sedentary behaviors.

Over the last 10 years, the city has been developing a series of policies and programs to improve food security and mitigate the environmental impacts of the food supply chain, ranging from urban agriculture initiatives to pop-up markets that bridge the gap between farmers and consumers. From a nutrition perspective, the issuance of the Anti-Junk Food and Sugary Drinks Ordinance, banning the marketing and trade of unhealthy food around schools, further highlighted the need to secure healthy food environments for children.

In 2020, the city’s response to COVID-19 also set an important precedent for making progress towards health and sustainability goals. The Quezon City Food Security Task Force, an interdepartmental model for collaboration, works to provide immediate aid to citizens as well as to formulate a food security and resilience plan for the longer-term recovery phase that will follow.

The diversity of actors and sectors featured in these initiatives illustrates a range of potential entry points for transforming urban food systems. Yet, four recurring themes stand out throughout all of Quezon City’s efforts to achieve a better food system:

Global action at a local level

“Cities as different as Amsterdam and Quezon City illustrate that local authorities can be lighthouses for innovation,” says Aguayo. “They often have substantial scope to take action and can demonstrate leadership in addressing national and even global challenges.” As a result, there is an opportunity to develop programs and actions that are designed with and for cities to ensure that all children and families living in them have access to healthy diets and lifestyles.

EAT and UNICEF will continue to promote these case studies and showcase how city-level action can contribute to respecting, fulfilling, and promoting children’s rights as enshrined in the Convention on the Right of Children, while contributing to the achievement of the 2030 Agenda for Sustainable Development. “UNICEF is committed to scaling up its advocacy work and programming to improve the nutrition and food environments of children living in urban areas,” says Aguayo. “We want to co-create solutions with local stakeholders and, foremost, with children and young people themselves.”

The improvement of food environments will also be a key area of focus in the process towards the United Nations Food Systems Summit in 2021. “We will make sure that we pay particular attention to children,” adds Kjørven. “We believe children and youth must be at the table, participating directly in shaping their food future. That’s their right, and if empowered, we believe they will play a key role in shaping the global food future.”

Click here for more stories of how EAT, UNICEF, and partners are working with cities and local governments to support healthy and sustainable diets for all communities living in urban areas.

To learn more about the Children Eating Well (CHEW) partnership between EAT and UNICEF, click here.