PERU: After an hour drive outside of Cusco, the ancient capital of the Incas, on dirt roads surrounded by snow-covered mountains and steep valleys with terraced agriculture, we find MIL, a game-changing restaurant, biodiverse farm and agricultural research center.

At 3500 meters above sea level in the mountains of rural Peru, the culinary center might seem out of place. But it’s actually a prime location in the midst of the world’s last hotspot for agrobiodiversity.

The Andes region, with 85 of the world’s 110 climate zones, is increasingly gathering attention from scientists as a real-life laboratory for how a changing climate affects the food we grow and eat.

The Incas were early agricultural researchers, dating from around the 12th century. MIL’s closest neighbor is Moray, the Incan ruins of amphitheater-shaped terraces. Historians believe the Incas used these circular terraces as an agricultural laboratory where they experimented with different crops and tested out various methods at each level’s microclimate.

Chef Martínez is famous for his Lima restaurant Central, named the world’s sixth best restaurant, and is playing a central part in the culinary revolution of Peru.

In 2018, he expanded his operations out of urban, coastal Lima up to the Andes with his team to start MIL, a multidisciplinary center where science, experimentation, innovation and food are intertwined.

“Virgilio totally fell in love with the beauty of the agricultural circles of Moray, and decided to come here for the project,” says chef Luis Valderrama Silva, the head of kitchen at MIL.

Their ambition is to protect and preserve the environment and the unique ecosystem in the Andes.

From a range of vegetables, legumes, cacao and grains, the menu at MIL represents ancestral cuisines and biodiversity in quite an extreme way; MIL only serves high-altitude ingredients.

Their eight-course tasting menu is an introduction to the Andes itself, going from the region’s kaleidoscopic variety of potatoes, to the different quinoa grains and herbal plants.

“The main object of the restaurant is to highlight the region’s diversity and share it with the world,” Silva says.

In the farming fields surrounding MIL, crops such as tarwi (an edible bean uses in soups or stews), kiwicha (whole grain used in pancakes, porridges and bread), quinoa, and 55 varieties of potatoes grow side by side. As we pass the different croplands, farmers from local communities look up and greet us warmly.

On the outside, MIL looks like any other nearby building. It’s appearance is very subtle, comprised of clay and hay, it blends in with the natural landscape. This is in order to “not disturb or bother the ancient surroundings,” Luis Valderrama Silva explains.

Inside, native botanicals are flourishing in the restaurant’s gardens, located under the open sky in the middle of the center. Aside from being an important part of the diets in Andes, the plants are being used for medicinal purposes by the locals and as natural dyes for artisanal textiles. Hullhua, mullaska, cheqche and pili pili are some of the plants growing in harmony with wild roots, flowers, chilies and aromatic plants.

Silva picks up some mint leaves and passes them over to us. The smell is intense and the taste even better, as this is something you certainly cannot find at your local supermarket.

The different rooms and sections around us have each something special to offer. MIL has it’s own cacao lab where you can taste different varieties of dark chocolate and where beans are stirred in machines for three days non-stop to get the right consistency. In the corner of the investigación room, there are ancient crops and super foods like chia and quinoa in all sorts of flavors and colors, laid out for the exploring eye.

As we walk through the quietness MIL has to offer, a film crew appears at the backside of the building. A dozen people are down at the ground searching for something we cannot see.

“They are making a documentary about the huge variety of Peruvian potatoes, over 4000 different sorts have been discovered right here in the Andes,” Silvia tells us.

Over the last couple of years, MIL has had several film crews visiting, including TV chef Gordon Ramsay for National Geographic, exploring the richness of Peruvian culture and cuisine. 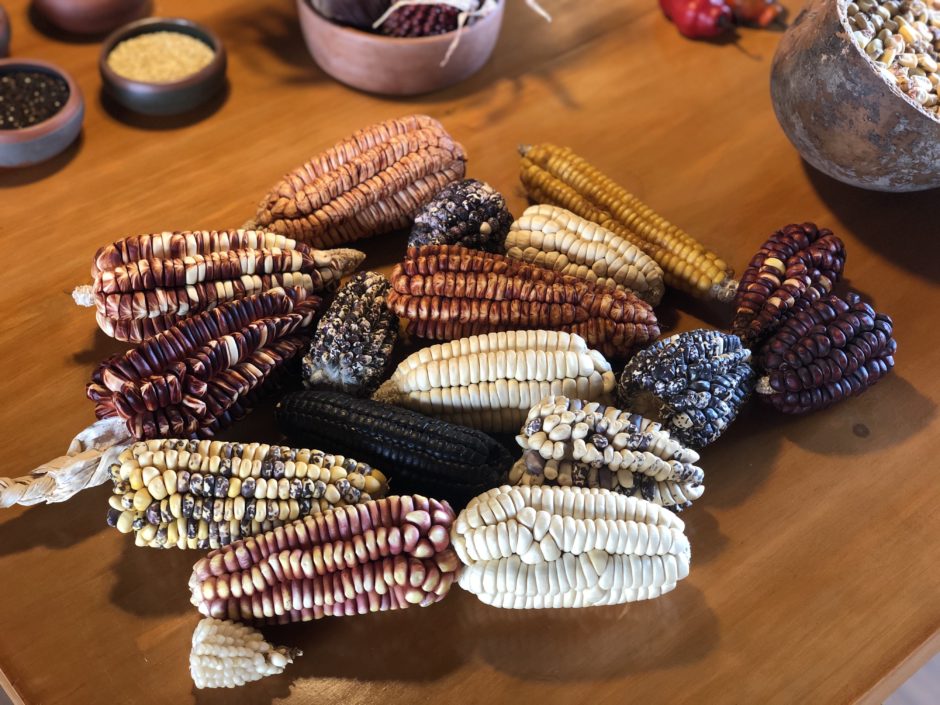 In Search of the Unknown

To create the menu, MIL does extensive research, and not in a traditional way.

Every month, a team of researchers led by Malena Martínez, the head of MIL’s research program Mater Inciativa, travels across Peru in search of new knowledge. Following members of local indigenous communities, they look for ingredients and techniques that might be new to the modern kitchen.

The research team collects plants and herbs that grow near the river in the Amazon jungle, at more than 4000 meters above sea level on a snow-covered mountain top or in the middle of Andes central frozen grassland. They invite students and researchers from around the world to learn alongside the team, as well as host events to bring together chefs and specialists.

Mater Inicitiva sends the samples to their partner universities in Peru, Spain and the United States to get more information on the different species, to preserve the indigenous plants and to spread awareness about the biodiversity living near their homes.

According to De Haan, a senior scientist writing for Time Magazine, in order “…to protect the Amazon Rainforest and beyond, we must start in the Andes.” The region is the world’s last remaining hotspot for agrobiodiversity where many nutritionally important crop species grow naturally, despite the major swings in temperature.

So far, MIL has discovered over 150 plants, “…but discovered isn’t really the word, because the plants have always been there. Now we just have more information and a better understanding of what grows in the Andes,” Silva tells us.

MIL has been recognized for it’s unique approach to support nearby communities, creating jobs and opportunities, and learning and sharing information with the indigenous people in Peru.

The region surrounding MIL is populated by 724 residents. MIL works closely with two farming communities – the Mullak’as Misminay and the Kacllaraccay. The community members work jobs in the farm and kitchen, develop different ceramic products and yarn used in the restaurant, and learn and share their traditional knowledge of food.

“The vision of MIL in the beginning was to work together with the nearby communities surrounding the area of the restaurant. That was our first and foremost goal. By creating a space to do research, we also wanted to secure people in the neighborhood jobs and to make sure that people who are interested in working in a restaurant, would get a chance to do that,” says Silva.

The principal industries in the local communities are agriculture and craftsmanship, which is shown in the investigación room at MIL. Beautiful ceramic cups, plates and different kinds of art are laid out in earthy colors.

By growing, harvesting, gathering and creating together with the local communities, the MIL team has ultimately learned how to use the great variety of wild resources available.

“First, when we came here, we thought we were going to teach the communities about the ways of cooking, but I was stupid to think that,” Silva explains. “I learn new things everyday by speaking to the people living here. There is so much to try out in the kitchen.”

Silva’s favorite local recipe so far has been the making of a traditional Chica Morada, a beverage made out of dried purple corn, which was a very popular drink among the Incas, who were famous for their architectural marvels and healthy habits. The drink is widely popular in Peru, but very often it is made out of syrup or a powder formula loaded with sugar. Made from scratch, the refreshing drink is rich in antioxidants and has a slightly rustic and sweet taste.

“All the children here knows how to make the Chica Morada. Everyone in the community is an excellent chef,” says Silva.

While MIL is a high-end restaurant where mostly wealthy Peruvians from the capital of Lima, and tourists, visiting Cusco and the nearby Machu Picchu ruins, come to eat, the team behind it hopes to inspire projects and restaurants to ultimately shift food culture so sustainable production and indigenous crops are introduced in the daily diet.

Just down the road from MIL, some local aspiring chefs have opened a similar restaurant to MIL, where a plant-forward cuisine and ancient crops are the focus.

“In the past, people thought that quinoa and potatoes was just for poor people. Nowadays people want to eat it because they know it is healthy,” says Silva.

He tells us that the new generation of chefs in Peru like Gustón Acurio, Virgilio Martínez and Pía León, are leading the conversation about biodiversity and ancient ingredients. “They have started to talk about the products, the benefits and the ecosystems, and people are listening.”

When traveling in Peru, it is easy to believe that the traditional cuisine is quite meat-heavy. We see dishes like lomo salteado (salt beef), alpaca, cuy (guinea pig) and arroz con pollo (rice with chicken). But we learn these dishes are not eaten every day by locals. “These are dishes to be enjoyed on special occasions as Sunday dinners with the family,” Silva explains.

And while fast food joints are popping up in the big cities of Peru, Silva is not concerned. “People are starting to respect indigenous products and are curious to learn more.”

The growing interest in native species like quinoa and lupines could eventually support high-value markets and enterprises that prioritize sustainability and diversity.

And by studying the effects of extreme conditions on key crops grown in the Andes, the grains can be safeguarded and improved, in order to meet a growing demand for sustainable diets, while also preserving rural incomes and livelihoods, like MIL successfully has done.

For scientist, chefs and farmers, the Andes offers an enormous opportunity to better understand how we can be prepared when extreme and unpredictable weather patterns appear in the near future.

And by protecting the agricultural diversity in the Andes, we can learn vital lessons and at best help the rest of the world survive the climate crises.

EAT advisory board member and renowned world-class chef Manal Al Alem and Gunhild Stordalen cook up a tasty lentil and pumpkin stew. You can find the recipe for this affordable and delicious Planetary Health Diet-aligned dish below.